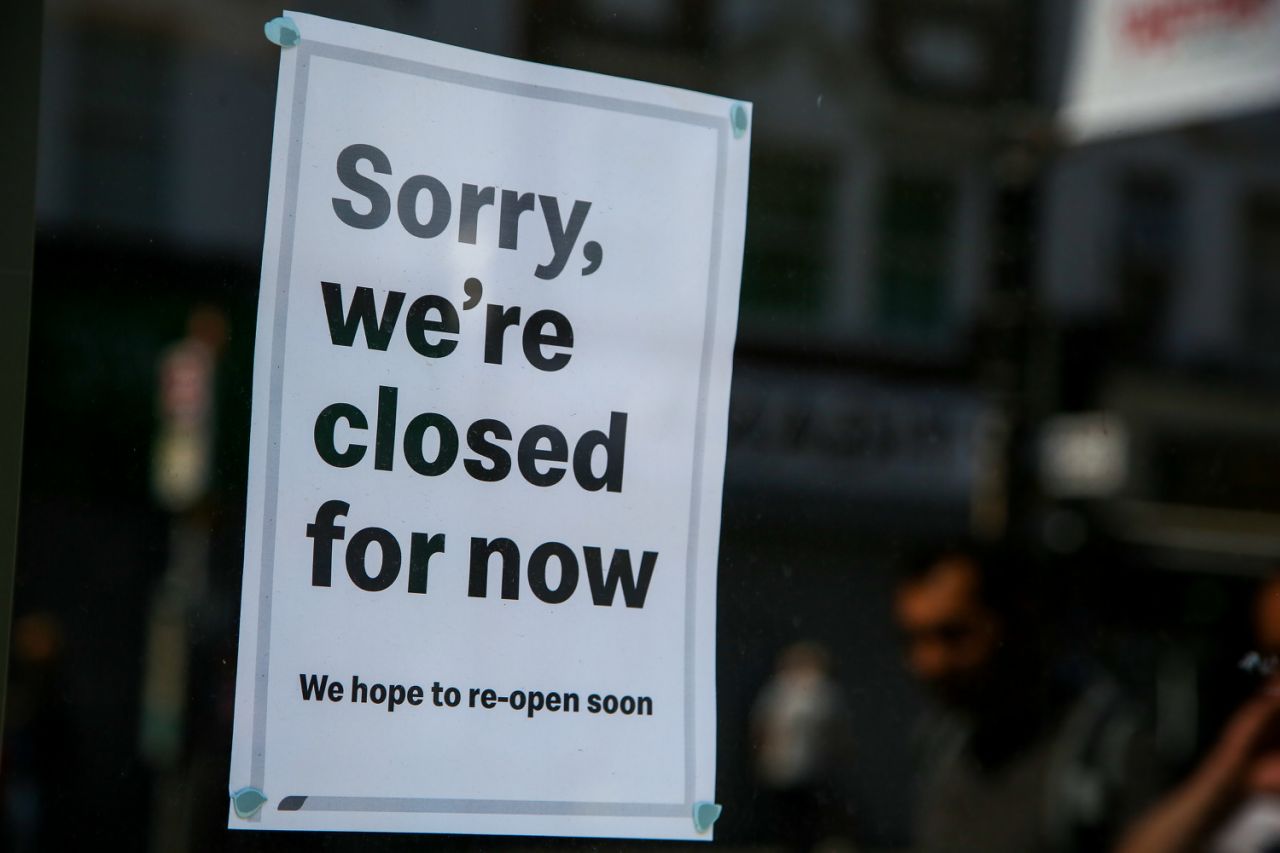 When Manchester restaurant 20 Stories advertised for a receptionist last month, managers were shocked to receive 963 applications in a single day.

The incident starkly illustrates one of the many ways employment in modern Britain has been transformed by the coronavirus pandemic.

Many firms had been struggling to fill vacancies before COVID-19 struck, with employment hovering around record highs. But the recession triggered by the virus and subsequent lockdown has wreaked havoc in the labour market.

The headlines have been dominated by lay-offs. Recruitment remains well below pre-virus levels in many sectors, despite a slight recent uptick and employment in a handful of growth industries booming like never before.

The crisis has forced workers to adjust to enormous changes at work on top of their personal lives, first during lockdown and now in an era of social distancing. A string of recent data suggests a growing proportion of workers have adapted not only by moving jobs, but by moving into different industries altogether.

Large numbers who lost their jobs in hard-hit industries have had little choice but to look further afield. A growing number of those still in work also appear to be choosing to make bigger leaps into different fields than before.

Official figures on Tuesday showed only 6.1% of workers switched roles between the first three months and the following three months of this year. The furlough scheme is widely seen to have kept millions of at-risk workers attached to their employers, while vanishing vacancies and economic insecurity are likely to have curbed many staff’s ability to and appetite to switch roles.

But the data only covers the period up to June. The Office for National Statistics (ONS) noted it also marked an uptick from the 5.7% seen a year earlier, and expects the trend to accelerate.

Occupational switching could become “more prevalent as employment support unwinds,” the ONS said, as government wage subsidies for furloughed staff are being gradually cut back. 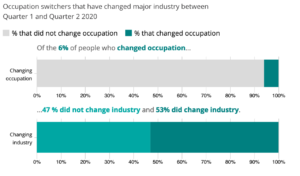 More strikingly, official data suggests work is changing radically already for the minority who have moved jobs. Among those who did switch roles this year, some 52.5% also switched industry.

“With entire sectors of the economy brought to a juddering halt by lockdown, for some workers it’s been less of a case of having to look for a new job, as looking for a whole new industry to work in,” jobs site Indeed’s UK economist Jack Kennedy told Yahoo Finance UK.

Competition forces jobseekers to be flexible

CV data from Indeed on what it calls the “2020 exodus” shows the steepest rise in job-hunting in new industries among workers with a background in hospitality, tourism, beauty and other struggling sectors.

Greater flexibility is also clear in what jobseekers are searching for online. Indeed figures show 28% of searches left the job field blank in the year to June, up five percentage points on pre-crisis levels.

The sheer scale of competition for jobs in ailing industries with so many out of work — as the 20 Stories vacancy suggests — is a key driver for workers to look beyond their sectors. Vacancy levels also vary markedly between regions, forcing some jobseekers to widen their net geographically as well as professionally.

Kennedy said this predictable increase in competition for hospitality, food preparation and customer service roles is clear too in vacancy trends on the Indeed site. He expects competition to grow across the wider economy this year.

“As the job retention scheme slowly comes to an end — and as unemployment is predicted to rise — there will be a scramble for available jobs during an inevitable rocky period for the economy,” he added.

“Not only are there far fewer jobs today than there were last year or even in early 2020, the mix of available roles has shifted too, which means some of the jobs people search for simply are no longer there.”

Josh Graff, UK country manager for LinkedIn, said its data showed a similar branching out into new sectors by those in the worst-affected parts of the economy. But he also highlighted growing applicant numbers in Britain’s professional industries, and called it the “toughest labour market in a generation.”

“LinkedIn data also shows that competition for roles has increased threefold,” he said.

Industry-switching will reflect a more proactive appetite for change for some workers, however, and COVID-19’s wide-ranging effects may be boosting such demand. Graff said the exodus from hard-hit sectors went “beyond what we would expected based on the new distribution of job postings alone.”

A survey published on Thursday by KPMG and Savanta found 44% of workers polled in financial services were considering a career change. “As we spend more time at home away from our colleagues and offices, it makes sense that many will be questioning their current roles and choices — and what the future might hold,” noted Karim Haji, head of financial services at KPMG UK.

Those surveyed highlighted a desire to escape long hours, long commutes, and regulations in the industry.

Experts have also seen rising interest in remote working roles in particular, which could reflect not only widespread virus fears but also office-turned-home workers re-assessing their options for remote roles.

Some workers have already seized new entrepreneurial opportunities thrown up by the crisis. Natalie and Adam Bamford, a couple who both work for cloud technology firm Selenity, were encouraged by their boss to design gift boxes for their team to keep them connected while working remotely.

The couple decided to turn the letterbox-sized gift packs they designed into a business, Derby-based ColleagueBox, with workers and firms requesting gifts that are sent out to colleagues.

“We set up our business during the pandemic and because of the pandemic. Overnight, we all had to learn new skills to set up an e-commerce website, something we had zero experience in. We became photographers, videographers, website experts, PR people writing press releases, social media wizards not to mention negotiating with suppliers, being sales people and bloggers,” said Natalie.

Anyone applying for a job in a new industry faces extra hurdles in showing they have the right skills.

More unemployed people are likely to look to re-train, and greater job insecurity may even prompt more of those in work to upskill to safeguard and progress their careers.

A survey by jobs site CV-Library found 59% of professionals reporting they were willing to re-train in a new line of work following the pandemic.

Around one in three said it was because they could not find work, while almost one in five said they simply wanted to change industries. More than half said it reflected a desire to make themselves more employable.

A recent report by the Resolution Foundation highlighted strong evidence that training improved people’s chances of securing a job after a stint of unemployment.

READ MORE: How to cope with uncertainty at work

But UK government funding for adult education has been slashed over the past decade, and experts say too many courses are also geared towards workers who already have high-level qualifications. One study earlier this year found the number of adults who had trained in the past three years was at its lowest level since records began in 1996.

“We have neglected to make quality training more broadly available to those for whom it would make the most difference. For example, workless non-graduates stand to benefit most from training, but they’re less likely than the average worker to receive it,” said Kathleen Henehan, a senior research and policy analyst at the Resolution Foundation, when the study was released last week.

Many of those in work but keen for a change may still not feel the middle of a pandemic and a recession is the best time to re-train or job hunt, however.

The KPMG survey suggests caution may outweigh a greater desire for change. Only 31% of finance staff polled planned to job-hunt in the next year, some 13 percentage points lower than the number who said they were considering making the leap.